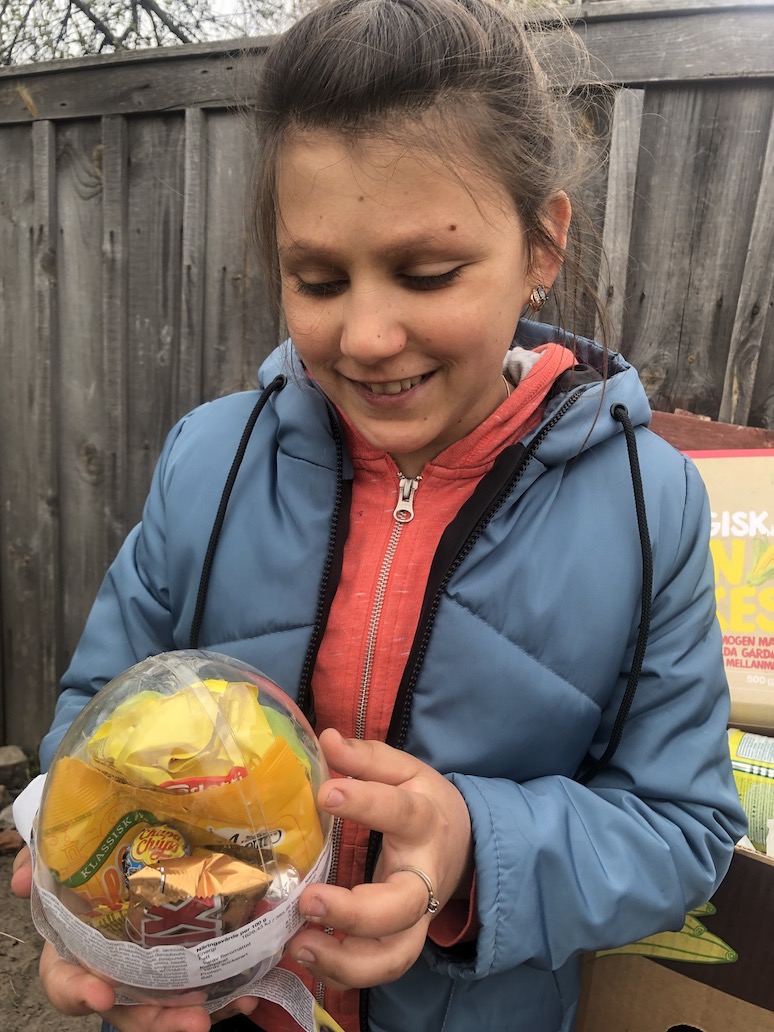 On 24 February, I woke up early in the morning, it was five o’clock. My mother wondered, “What’s with all that noice?”

At first I didn’t understand what it was. But when she turned on the TV, I realised that a full-scale war had started, and it was Putin who started it. At 6 o’clock in the morning, my father quickly went to Bobrovytsia and filled up the car.

Four days later, at dinner time, dad ran into the house and told us to hide quickly in the cellar, because tanks were coming to our village. We had all the important papers with us. We ran to the cellar. We sat there, and the tank lines just kept going and going down our street. Then they stopped in the middle of our village. I hoped they would just spend the night and go away.

The Russian soldiers stayed in our village for almost a week. They took over our school and looted our shop. One morning our neighbour was so nervous that she died. The next day, when she was to be buried, my father told us to try to get to my grandmother’s house on the outskirts of the village. My father sensed that something was going to happen. My mother was crying, she was scared. The road to my grandmother’s house went through the centre of the village, and there they were, the Russian soldiers.

We gathered what we needed and left. As soon as we left the street, we met a Russian soldier. My mother prayed with tears in her eyes that they would not shoot us. They let us go.

We came to my grandmother’s house and stayed with her for about 8 days. The Russians looted our shops. I just wanted to go home, and finally we decided to go back. Everything went well. Eventually we were home and we started to prepare a meal. Mum noticed that there were not enough potatoes in the basket and went down to the cellar. I went with her. We heard machine gun fire and ran into the house. After 20 minutes, we heard a knock on our door. My mother knew that the russians were at the door. I didn’t want my mother to go and open the door alone. I went with her. My mother told my father to sit with the younger children. We went outside and talked to the Russians. They were quite young and sociable.

When we returned to the house, shots began to be fired from automatic weapons. There was another knock on the door. This time my mother didn’t want to open the door, but she did anyway. If my mother had not opened the door, the Russians would have opened it with fire.

Two Chechens stood in front of us. They told us not to be afraid. How could one not be afraid here when they had a machine gun on their shoulders. A young Russian called Dima said that many had died and that some soldiers were still in Russia. He said he wanted peace and to go home. His family and girlfriend are waiting for him.

At this point the Russians went to the neighbours and destroyed property. Some Russians came to us and asked if we had food for them. My mother replied that she did, and took a chicken from the freezer. They were happy and went into our garden. The sergeant quickly called the soldiers to him and told them to go to the tanks because it was already dark. They were afraid of the dark.

In the morning we heard that they had shot and taken a man from our village. We quickly went to Grandma’s house to feed the cattle.

One day there was heavy shooting and fighting in our village. We spent the whole day in the neighbour’s cellar. The next day the fighting continued, and the Russians fired on all the houses on the main street. Then the Russians started taking men prisoner, and we fled to another village. We had to escape, we were evacuated. The fighting continued for another day, then we were told that the Russian troops had been withdrawn from our area and we returned home.

Now we are all well. Our village is safe. Our shops were bombed, but the owner comes to the shop for a few hours to sell the goods he brought with him. The prices have gone up.

The rocket didn’t hit our house because of an old apple tree. It hit the upper branches and the rocket changed trajectory and hit a nearby abandoned house. The old apple tree saved our house.

I want to thank you for your moral and material help.
Yana