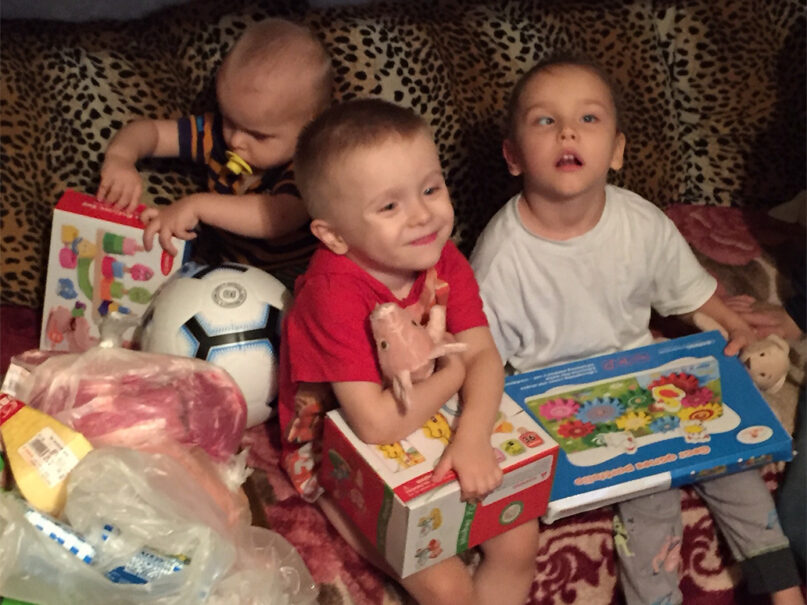 Our sixth Christmas in Ukraine was once again colored by the tension over the war in Eastern Ukraine – despite the cease-fire agreement, it is being shooting at Ukrainian targets every day. The political situation is also escalating and the people are gathering for demonstrations.

The weather was “like in May” when we, together Viktor and Sveta from the team in Ukraine, and with Bertil and Kristina from Sweden, visited two families in Kyiv. Shopping bags with groceries, and small gifts where happily received by the families.

We had a busy week in “ Friends’ House”  buying groceries for families, visits, Christmas party preparation and above all baking. Tanja has just left the hospital after her surgery, and she lives with her children and cats in “Friends House”, so there is plenty of life.

We brought beautiful knitted items from Anja and Leena from Kerava to a new family. Mother Nastja and her children Ira and Artem live far away in a village. We were particularly pleased with the visit to the Zagika family, where mother Oksana has significantly recovered.

We baked the first gingerbread with the kids at Friends House. We had seven bread rolling pins and just as many children were seated around the table.

This week the Sunday school was held by the Orthodox priest in Pisky. He talked about the importance of Christmas, and the children could  ask questions. Finally, the children from Sunday school baked gingerbread with great enthusiasm.

Together with Tanja’s family, we also baked small buns for Christmas Eve and for Sunday school’s Christmas party on Saturday. The yeast had been hiding somewhere, but little Maksim saved the situation by rushing into the shop in the village. The first store had no yeast, luckily there was the second store. They got it !

On Monday, the team began preparing the Christmas meal: a couple of hundred meatballs, chicken and a salad called  olivie. Right then there was a power cut throughout the  whole village! Immediately, the water pump stopped working and so also the internet. The Ukrainian team did not get very nervous about this – for them  power cuts  are a normal life. The water was collected in buckets and a small wood stove came into use. In this way the cooking could be carried out. In the evening the lights came on again, the power came back.

Children’s singing and poetry reading are always equally poignant. “Rejoice, the world, the Son of God is born!”

Here the children do not wrinkle their noses at the dining table, but they eat with good appetite.

Santa had brought small packages for all the children, which Katja distributed. This time, the packages contained tricks, knots and cubes.

Soon we will start the new year. As Viktor Pavlovich expressed in his party speech, we also want peace in Ukraine and throughout the world.