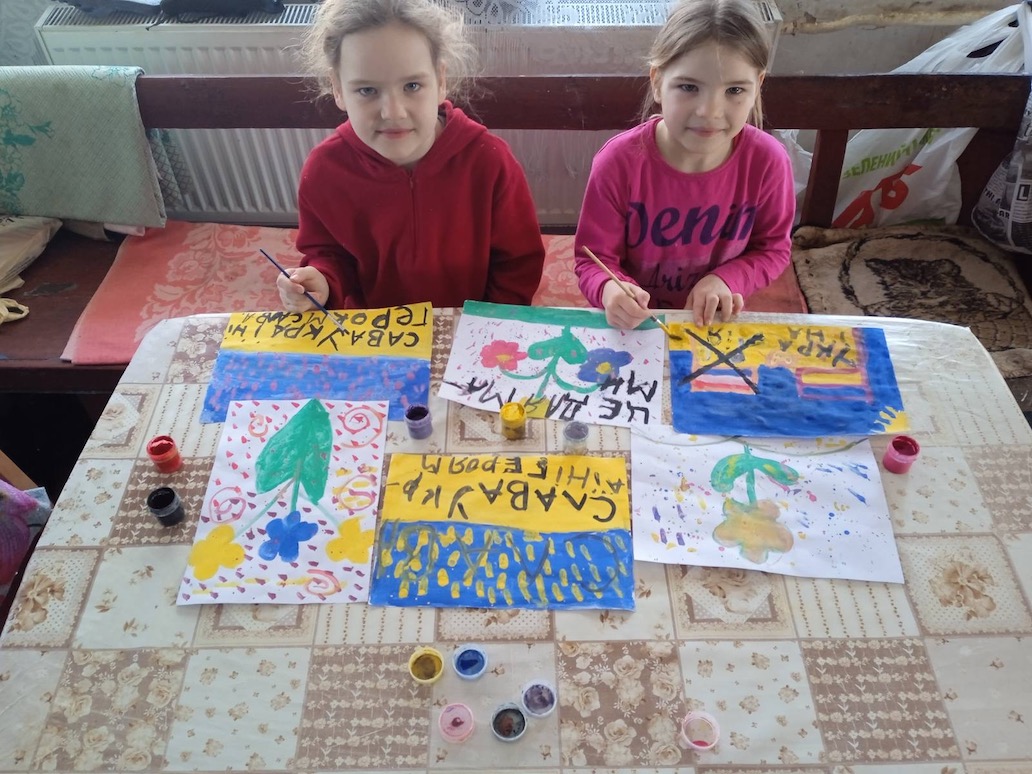 Our peaceful life ended on February 26th. Russian troops invaded our quiet village. On the first day, they drove their tanks and vehicles back and forth on the main street, shooting around them. The children ran to the cellar at once. The firing lasted for 3 or 4 hours.

We squatted down in the cellar. We cried and prayed that my husband Andrey could return safe. The shots had broken gas lines and set many houses on fire, so Andrey took the car to go and close the gas valve. When he drove back, they shot at him. He barely managed to leave the car and run.

We lived under constant fire for three weeks. Bombs fell and rockets flew over our home. We sat in the cellar all day. The children were not able to eat or wash properly. There was no electricity or gas in the village. The Russians plundered the groceries, and there was no food left. We crouched when we crossed the yard. If it was quiet in the evening, we slept in the house, but we kept our clothes and shoes on. We took turns sleeping at night, in case we would not wake up with the sounds of shooting. The children sometimes slept the nights in the cellar, when the firing went on. They suffered, they were so afraid, and they could not understand why all this happened. Then the tanks and vehicles moved on to our street and we realized that the situation would be worse. We took the children, hid our documents in our boots and walked to the checkpoint.

I told the invaders that we wanted to go to the shop. They let us through, but they searched us first. They told the children to open their jacket buttons. They groped the children with their dirty hands. The girls were so afraid that they peed in their pants and started to cry. Then we walked. We walked and prayed that they would not shoot us in the back. It was certainly the longest and most awful walk of my life. The Russians had taken our phones and we had not been able to phone our relatives for a long time. We did not know where we were heading, and nobody else knew where we were.

Then a car stopped and the driver offered us a lift. But we were too many for the small car. It seems that God himself protects us: another three cars stopped, and we put the children in them and rode on.

When we reached village Yagotyn, I went to the social welfare officer. We were taken to another village where there were no invaders. For the first four days, the children would not go out. They were afraid of loud noises and cars that passed by. But gradually they settled down. They went to the playground and to the grocery. I enrolled them in the school.

Every day and every night, I pray to God that they need no longer see and hear war. Nothing is more valuable than children’s joyful laughter, their lovely soft snoring and the playful atmosphere when they bathe. Such outwardly simple things are the cherished elements of a peaceful life.

These 45 days of war have changed our children. They never minded about politics earlier. Their thoughts and their view of the world have changed completely.

My eldest son Rostik is in Kyiv now. His little sisters know that he defends and protects their peace. The girls draw pictures for him and talk with him on the phone. And I pray for the children, for freedom and for Ukraine’s independence. A horrific sorrow has met us, but we are strong and invincible. The victory will be ours. We know it will.